by Kirsten Anderberg (www.kirstenanderberg.com)
Written 2003
Women's Body Esteem is big business. Billions of dollars are spent on the "weight loss industry" yearly. That industry is solely dependent on women's self-hatred. Women are reduced to size, told to be less, told to shed big chunks of themselves for acceptance. Likewise, the "beauty industry" has convinced millions of women that chemical crap on their faces, and plucked eyebrows that are drawn back on, is "beauty." Additionally, the "sanitary protection industry" is here to protect society and women from supposedly toxic and shameful menstrual fluids, that must be hidden and sanitized. May I suggest the very radical political action of robbing these industries of your body hatred dollars? 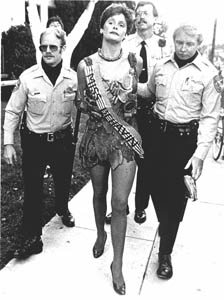 Ann Simonton at Santa Cruz Myth CA protests 1980's
I first became aware of the women's body esteem movement in 1983, in Santa Cruz, California. Ann Simonton (www.mediawatch.com), a former cover model for Sports Illustrated Swimsuit Edition, Cosmo, Covergirl, etc., turned her attentions to body activism shortly after a revelation in a dressing room with other models. She was getting ready for a photo shoot with other famous models and they were all complaining about different parts of their bodies. Their necks, their thighs, their stomachs, their eyes...And it hit Ann that these models were the pinnacle of beauty that society was holding up as every woman's ideal, yet it still was not good enough. Their photos from the shoot would be airbrushed. Ann realized the modeling industry was promoting an unattainable standard of beauty for women.
In 1980, Ann merged with Nikki Craft (www.nostatusquo.com) and began to organize brilliant protests at the annual Miss California Pageants, held outside their front doors in Santa Cruz. These protests educated the entire region to these issues. First, ribbon-wrapped meat was thrown on stage during the bathing suit competition. But by 1981, a very gaudy flatbed truck began to circulate the streets of Santa Cruz, with live contestants wearing banners that said "Miss Behavin'," "Miss Understood," etc., as they waved, and signs on the vehicle read "No More Profits Off Women's Bodies" and "Myth California: Never Again Uncontested." Songs such as "Thank Heaven For Little Girls" blared off the float. By the actual coronation night, about 250 protesters in costumes surrounded the Santa Cruz Civic Auditorium. The float was now full of 100 hand-made porcelain Barbie Dolls, all from the same mold, but they each had banners saying things like "Miss Chevious," and "Miss Ogyny." Some threw up at porcelain toilets. A sign that said "Is it Art or is it Politics?" adorned the float as it circled the auditorium. Three activists with tickets entered the auditorium, pulled out red lipstick and drew warpaint on their faces, as they stood by the doors passing out fliers.
By the time I arrived on this scene, protesters were running a plant as Miss Santa Cruz. Michelle Anderson had become first runner up, and then won as Miss Santa Cruz in 1988. Michelle, with Ann as a coach, referred to this as being good "at" beauty, rather than this relating to actual beauty. Michelle leaked beauty pageant secrets such as duct-taping breasts, and adhesive sprayed to butts, during swimsuit competitions. Ann was wearing designer evening gowns made out of steaks with ribbons, as cops went nuts trying to keep their dogs off her. Streets were closed off, police had a full presence. And to top it all off, Ladies Against Women, a feminist street theater troupe out of San Francisco came down to "counterprotest" our protest, in wigs, horned rim glasses and furs, with hilarious handouts and signs saying things like "I'd rather be ironing."
It was complete chaos. Finally the Miss California pageant moved to San Diego. And the Santa Cruz entourage followed in busloads.
I once did a "body esteem for women" workshop at a resort, and the enrollees were all young, thin, blonde women. Women who were considered the "pretty" ones in this society. Yet here they were, begging for help, with LOW body esteem from a girl who DOES NOT always fit society's little tiny definition of beauty for women. I was stunned at this, and then realized, of course, thin women live in as much, if not more weight slavery than fat women! It makes total sense. This weight slavery thing is so often about controlling and manipulating women, keeping us down; it literally has NOTHING to do with real health issues MOST OFTEN. THIN YOUNG WOMEN IN AMERICA WALK AROUND THINKING THEY ARE FAT and it is truly SICK. Anorexia kills women constantly and we keep telling them still - YOUR NUMBER ONE CONCERN AS A WOMAN MUST BE MAKING SURE YOU ARE SMALL FOR MEN'S COMFORT. SO YOU DO NOT THREATEN THEM. Women walk around hating themselves their whole lives because men manipulate them around weight, for power and nothing else. To the contrary of their proclaimed mission, these men make women LESS HEALTHY, not MORE HEALTHY, by their weird sexist doublestandards of beauty for men and women.
People need to discuss how much of this body imagery stuff is just a product sold to us by industry. We are being brainwashed to hate our bodies so that we can buy unnecessary products to remedy them, and waste endless hours on artificial beauty. There is an argument to be made that beauty products, dieting and other body image consumerisms are diverting our attention from important things, like the economy, as much as any war does!
Guerrilla theater and activism helps to counteract the negative imagery from the beauty industry, while entertaining and educating at the same time. International No Diet Day, May 6, is always a good day for activism. Other forms of radical body activism are as simple as using cloth pads, like your granny did, for menstrual flows. Or not wearing commercial makeup on your face. Take your body esteem out of the hands of corporate industries and realize that you are more beautiful than you ever imagined today!
Topics: 1980s, body issues, health, sexism