Spanish Anarchist Women: Fighting For Equality, and Also Killing Fascists Way Before the Rest of the World Decided It Was Cool (2012)

Spanish Anarchist Women: Fighting For Equality, and Also Killing Fascists Way Before the Rest of the World Decided It Was Cool

(For this post, I am invoking my "I don't care if this subject is not actually from the 19th century, it's my blog and I do what I want" policy.)

Which brings me, as so, so many things do, to Spain in 1936. The Spanish Civil War was going on, which meant that the Republican forces, consisting of anarchists, communists, socialists and others were all fighting against the fascist Nationalist forces. A lot of countries that didn’t actually care much for fascism, ostensibly, including France, the U.K., and the U.S. had decided not to get officially involved in this one, because apparently, France, the U.K. and the U.S. weren’t killing fascists before it was cool. Some of their citizens showed up in Spain as volunteers though which was kinda cool.
I’m not here to talk about what various countries were doing, though. I’m here to talk about anarchist women of the Spanish Civil War. You can tell from my title.
There were plenty of women in all the revolutionary parties of the Spanish Civil War, but women tended to be most active in the anarchist movement, because that was a movement that actually went out of its way to challenge the oppression of women and actually, in many cases, fought for women’s equality. So not only was it a movement that called out to women, it was a movement that allowed them to do shit, which means that there are a lot more awesome anarchist women out there than there are, for example, fascist women known for their contribution to their movement. The anarchists established collectively run day care centers to better allow women to participate in politics, for example, which just makes me really happy; I think you can effectively judge a society based on how easy they make it for women to, as they choose, get out of the home and do shit. It also became more usual to see women wear pants in public. Women were suddenly allowed to, you know, own property. And go around without a male chaperone. Stuff was changing!
But many anarchist women had little time to enjoy their new childcare, fashion, and walking-around-in-public options, because they were also, as necessary, taking to the streets and storming armories in order to arm the militias, then joining them and heading off the front to fight some fascists.
I am not a military-type historian (or indeed an historian at all, though I am educated enough to know that the phrase is “an historian” not “a historian” so I want points for that), so I am not going to be using words like “tactics” or “feint” or, I don’t know, “flanking maneuver.” Instead, I am going to be talking briefly about anarchist women who joined the fight against fascism, and I am going to be using words like “badass” “amazing” and “so fucking amazingly badass.”
There were, according to some people better at history than me, probably around 1000 women in the militias that formed up to fight against the fascists. I would dearly love to be able to tell you about every individual one of them and their heroic awesomeness, but I can’t, because I would only be able to give them like, one word each within this article, and that seems silly.
So. Like I said, when the fighting first started, women just kind of joined as a matter of course. The militias were pretty unmilitary at that point, so there wasn’t anything to stop them. I mean, they used guns and shot people and all of that stuff, which is fairly military I guess, but they didn’t salute, officers were elected by the other soldiers, and they generally tried to keep the whole thing informal and nonhierarchical. To the extent possible, personal autonomy was respected. Unsurprisingly, that kind of setup, rather than the traditional militaristic one, kind of lent itself to women joining in in the traditionally male role of soldier. Off to battle they went. Some of them joined the militias with male relatives, including fathers, brothers, or boyfriends. Others met men they would end up marrying while in the militias. These were men who they met in a world where they were both treated as equals, something that hadn’t ever really been possible in excessively traditional, excessively Catholic Spain. Some of the couples were even married in uniform, which I think is just an awesomely direct way of showing how on equal terms with each other they were.
You know how the first reaction to change is always “aaaah! HELP! CHANGE IS HAPPENING MAKE IT STOP”? Well, interestingly enough that is so not what happened in this case. Instead, the milicianas (militiawomen) became icons and propaganda pieces. “Look how awesome the fight against fascism is,” the militias would say (not in those words) “it’s so awesome that even women want in on it. And don’t they look good doing it?” Yeah, not gonna lie, there was a bit of objectification that went into that turning of women into icons. Like, a picture of men in a militia would show them firing guns, but a picture of women from that same militia would show them posing with their guns and smiling at the camera. Like ya do, in a war. Stupid shit like that. In my view, there’s no reason to try to make someone in an anti-fascist militia look sexy; they’re already doing the single sexiest thing it’s possible for a human being to do. (Does this even count as a fetish? If so, it must be ridiculously common.) 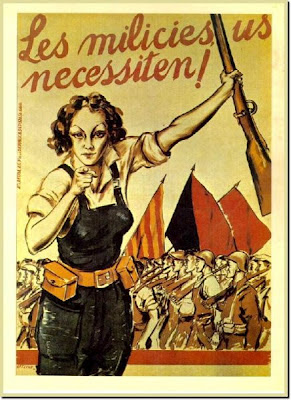 A recruitment poster. See how she’s like an amalgamation of Rosie the Riveter and the Uncle Sam “I Want You” only way more badass?